Back to news
UNICEF

Fulfilling the right of street children to be counted

Millions of girls and boys around the world live or work on the street. Widely recognized as being acutely vulnerable and marginalized, these children routinely experience severe and persistent rights violations. But as much as the international community understands the intense risks associated with living on the streets, relatively little data are available on these children.

Six-year-old Feda is one of them. An Ethiopian refugee, Feda (name has been changed to protect her identity) lives with her mother on the streets of Djibouti. The young girl is talkative by nature, likes to share and easily laughs. But she has experienced far more than a child her age should have to endure.

Mother and daughter sleep at the capital city’s former train station every night. Feda’s mom works as a commercial sex worker, a job she must perform in front of her daughter, simply because Feda has nowhere else to go. Lately, a man has been visiting Feda and her mother at night, bringing them food. He stays a while, Feda has told the counsellors at a Caritas-run drop-in centre for the most vulnerable children, which is supported by UNICEF. The social workers are worried about Feda, worried about this man and his relationship with the mother and daughter. They sense that the girl, who has been coming to the centre since arriving in Djibouti, is changing. The trauma of the street is beginning to take its toll on the six-year-old.

Most girls visiting the centre – typically migrants and/or living on the streets, like Feda – have been victims of unimaginable violence, such as rape, incest, exploitation and prostitution.

Lost in the system, absent from official statistics

Protecting children like Feda is an obligation that the international community and countries around the world have committed to fulfil. The UN Committee on the Rights of the Child mandates that States uphold their obligations to apply a child-rights approach to strategies and initiatives for children in street situations (see General Comment 21, 2017). Notably, the Committee emphasizes the crucial importance of systematically collected data on these children.

This is echoed by the 2030 Agenda for Sustainable Development, which calls for reliable data that go beyond averages to ensure that no one is left behind. The 2017 Secretary General’s report on the SDGs included explicit reference to the limited data available on children outside of family care – which, in many cases, means children living on the streets. These children are not captured through household surveys and, therefore, reside outside the reach of many data collection efforts.

Children in street situations may be runaways or homeless. They may work on the streets. They may live on the streets with or without family; some return to families or shelters at night. A small number may be reflected in household or facility-based surveys, like those who return to families or sleep in shelters. But for countless boys and girls, their frequent mobility and isolation from social services almost guarantee that they are excluded from typical data collection methods. Absent from official statistics, these children remain politically and socially invisible, amplifying their marginalization and exposure to rights violations.

Yet, the systematic collection of data on this vulnerable population remains uncommon in most countries. When data have been collected, the methods used have varied widely, often with different definitions and degrees of rigour. This has resulted in conflicting country-level figures. Similarly, outdated and unreliable estimates exist at the global level. While some countries may have estimates of children living on the street in large cities, the methods used to capture this population have varied widely, not only undermining the comparability of the data between countries, but also the ability to monitor changes over time in the same country.

These inconsistent figures hamper advocacy efforts and mean more children are at risk of intolerable violations of their fundamental rights.

The Data and Analytics section of UNICEF convened this year a technical consultation to discuss data needs and challenges related to the collection of data on street children, share best practices and lessons learned from previous efforts, and identify strategies to address data gaps. It was agreed that priority should be given to the development of robust data collection tools for enumerating children living on the streets and collecting quantitative data on their well-being. Lack of financial resources and limited political commitment were identified as key bottlenecks to further progress in strengthening the availability and quality of data. An expert group was created to facilitate the exchange of information about methodological developments, promote joint advocacy initiatives aimed at galvanizing commitment and investments in data, and identify funding opportunities.

Monitoring the situation of street children and assessing whether their rights to health, education, protection and participation are fulfilled require comparable statistics collected at regular intervals. This can only be achieved through the use of a validated set of data collection instruments, including a standard protocol for proper country implementation to minimize variability and measurement error within diverse implementing agencies/partners.

An accurate count of the number of children living on the street will allow governments to determine the magnitude of the situation. Information on their characteristics and well-being will provide key insights into who these children are, where they come from, and how they live. With these data in hand, policymakers can formulate the right policies and interventions to help manage and overcome the intense threats of the street. Only with accurate and reliable data can countries develop effective, targeted strategies that address both prevention of and response to the factors that impact these children’s lives every day.

Data on these children are vital. Vital to connecting them to service delivery. Vital to informing reforms that promote family strengthening and reunification, where possible. Vital to holding governments accountable in fulfilling their obligations to all children.

Data allow street children to be seen and understood. These children are entitled to the same respect, dignity and rights as any other child. And, like every child, they deserve to sit at the helm of their own life’s story and the chance to follow their dreams. 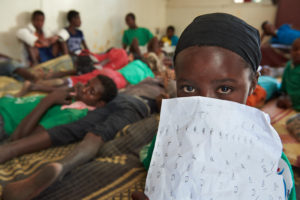 Feda [NAME CHANGED TO PROTECT IDENTITY], 6 years old, sits with other children in entertainment room at Caritas Centre for Children in the city of Djibouti.

Feda came from Ethiopia in 2015 with her mother. Fortunately her mother decided to still take care of her, which is not the case with many mothers arriving as refugees in Djibouti. They live together in the street and when the night comes they sleep at the former train station.

Feda, because of her age, needs to sleep close to her mother, which she does, but it has it’s own challenges. Her mother is a commercial sex worker. When she has a client, she does it in front of Feda or brings her along to other places where she works. Feda, even though very young, and has been subjected to extremely adult exposures.

It’s is a sensitive work of patience, link of trust, which already exists, but has to be strengthened to find and realize to best solution for her. Even though she was very young when she arrived to Caritas, we were not about to provide her with a shelter. She has changed at lot , positively, even though she may have been abused – very probably!, we were about to give her some of the joy of life back. But the work is not finished yet. We are very concerned with the issue of the man coming to them every night. It is a big priority for us to figure out what is going on, and how we can protect Feda.

With support from UNICEF, Caritas runs a drop-in centre in Djibouti for the most vulnerable children. The centre provides a package of social services to children, including basic health hygiene services, food, and clothing.