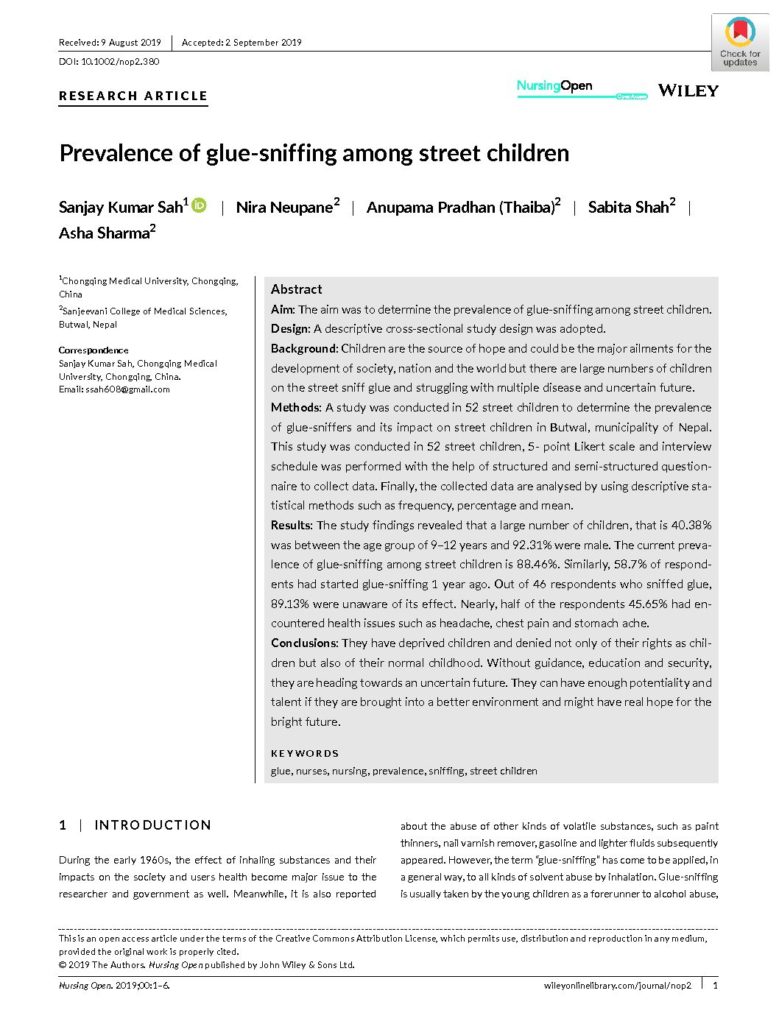 Prevalence of glue‐sniffing among street children

Aim: The aim was to determine the prevalence of glue‐sniffing among street children.
Design: A descriptive cross‐sectional study design was adopted.
Background: Children are the source of hope and could be the major ailments for the development of society, nation and the world but there are large numbers of children on the street sniff glue and struggling with multiple disease and uncertain future.
Methods: A study was conducted in 52 street children to determine the prevalence of glue‐sniffers and its impact on street children in Butwal, municipality of Nepal. This study was conducted in 52 street children, 5‐ point Likert scale and interview schedule was performed with the help of structured and semi‐structured questionnaire to collect data. Finally, the collected data are analysed by using descriptive statistical methods such as frequency, percentage and mean.
Results: The study findings revealed that a large number of children, that is 40.38% was between the age group of 9–12 years and 92.31% were male. The current prevalence of glue‐sniffing among street children is 88.46%. Similarly, 58.7% of respondents had started glue‐sniffing 1 year ago. Out of 46 respondents who sniffed glue, 89.13% were unaware of its effect. Nearly, half of the respondents 45.65% had encountered health issues such as headache, chest pain and stomach ache.
Conclusions: They have deprived children and denied not only of their rights as children but also of their normal childhood. Without guidance, education and security, they are heading towards an uncertain future. They can have enough potentiality and talent if they are brought into a better environment and might have real hope for the
bright future.