On the 28th September CSC attended the UN Child Rights Committee’s Day of General Discussion on “Protecting and empowering children as human rights defenders”, a proposed topic submitted by Child Rights Connect. We worked with our members Street Child United and Casa Alianza, as well as the Fairplay for All Foundation, to make sure street-connected children’s voices were represented on the day, alongside children acting as human rights defenders from all over the world. It was great to hear from Rose Ann and Marianna who spoke out about some of the issues faced by street-connected children including difficulty accessing formal education and short-term corporate interventions that don’t provide long-term benefits. 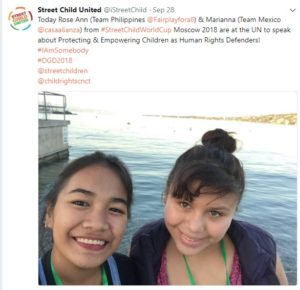 The day included an opening plenary including an inspiring speech from Keita, the children’s international peace prize winner who spoke out about the injustices carried out against children around the world and the need for action. He ended with a call to action for young people to realise that they are the powerhouse of the world, and that they need to show the adults that they have to be listened to.

Children and young people from the DGD Children’s Advisory Team were involved in all of the panel discussions and the workshops that focused on online spaces, state actors and non-state actors. There was also an interactive quiz on “The views, perspectives and recommendations of children across the word”, a document that presents the direct voices of children who participated in the consultations. You can access the document here.

You can also watch the sessions on the UN Web TV site here.

It was fantastic to see so many organisations and young people working to defend children’s rights around the world, and we look forward to seeing the various pledges made put into action.