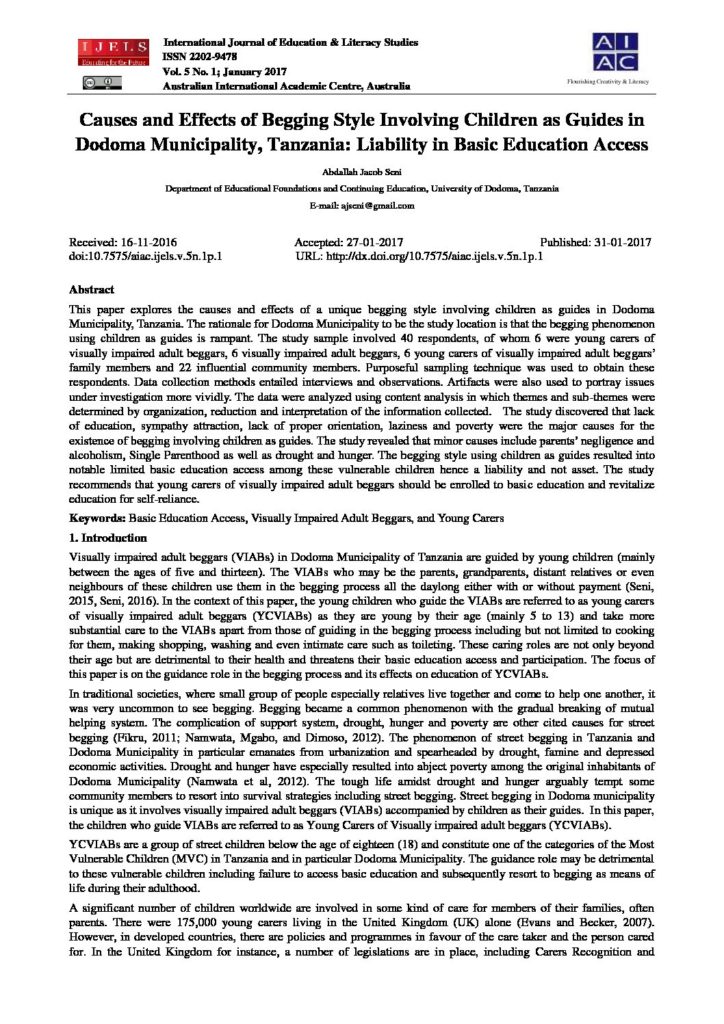 This article is published in the International Journal of Education and Literary Studies and is distributed under a Creative Commons Attribution 4.0 International License.

This paper explores the causes and effects of a unique begging style involving children as guides in Dodoma Municipality, Tanzania. The rationale for Dodoma Municipality to be the study location is that the begging phenomenon using children as guides is rampant. The study sample involved 40 respondents, of whom 6 were young carers of visually impaired adult beggars, 6 visually impaired adult beggars, 6 young carers of visually impaired adult beggars’ family members and 22 influential community members. Purposeful sampling technique was used to obtain these respondents. Data collection methods entailed interviews and observations. Artifacts were also used to portray issues under investigation more vividly. The data were analyzed using content analysis in which themes and sub-themes were determined by organization, reduction and interpretation of the information collected. The study discovered that lack of education, sympathy attraction, lack of proper orientation, laziness and poverty were the major causes for the existence of begging involving children as guides. The study revealed that minor causes include parents’ negligence and alcoholism, Single Parenthood as well as drought and hunger. The begging style using children as guides resulted into notable limited basic education access among these vulnerable children hence a liability and not asset. The study recommends that young carers of visually impaired adult beggars should be enrolled to basic education and revitalize education for self-reliance.