CSC and Baker McKenzie win at the PILnet Global Awards

We are thrilled to announce that CSC and Baker McKenzie, alongside more than 20 of their corporate partners, have won the PILnet Global Award for Exemplary Partnership in the Public Interest for our work on the Legal Atlas for Street Children.

The Legal Atlas gives governments, advocates, community members, stakeholders and young people themselves access to a basic and clear understanding of how a particular nation’s laws treat street children. 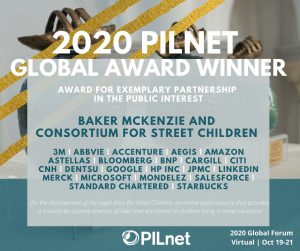 To date, more than 20 of Baker McKenzie’s corporate partners have worked on the Legal Atlas, with more than 1200 professionals putting in over 8000 hours of work to provide a visual, accessible tool that puts the law directly in the hands of those who need it.

Angela Vigil, Partner and Executive Director of the Pro Bono practice at Baker McKenzie, says, “this is not your typical pro-bono project, it’s one designed to slowly but surely transform the rule of law for an significant, and somewhat invisible slice of the global population, street children.”

To find out more about the Legal Atlas, click here

To find out more about partnering with CSC, click here