Leading international law firm, Baker & McKenzie, will partner with the world’s only global network of street children’s organisations, Consortium for Street Children (CSC), over the next three years.

This announcement was made by Angela Vigil, Pro Bono Partner and Executive Director at Baker & McKenzie, on behalf of its new global and first British Chairman, Paul Rawlinson, at a reception in the House of Lords with the charity’s Patron, Rt Hon Sir John Major KG CH.

“When children are not cared for – we have all let them down.  By we – I mean governments and individuals.  It is – to me – extraordinary that they have been left so far behind for so long.  Extraordinary – and indefensible.  It is as if they are invisible to the conscience of the world.” 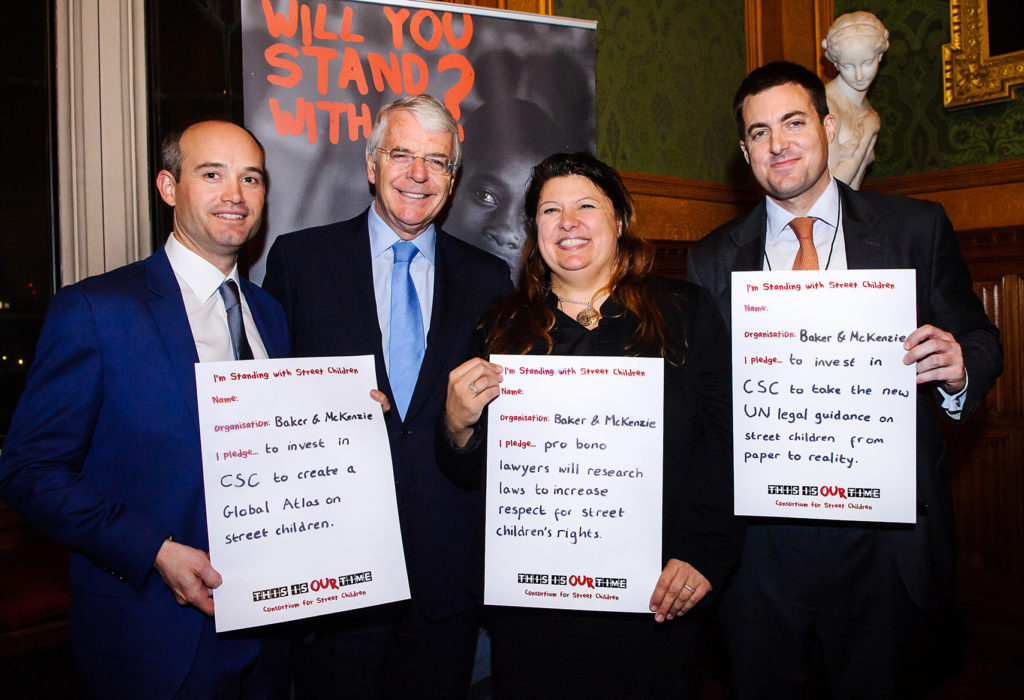 Baker & McKenzie will partner with CSC through investing funds as well as pro bono legal expertise. The firm’s donation will help make street-connected children visible on legal and policy agendas.

In particular, CSC will be able to create global awareness of the forthcoming landmark – the United Nations General Comment on Children in Street Situations, the first ever international legal framework to protect the rights of street children. Baker & McKenzie’s donation also enables CSC to provide technical expertise to ‘early adopter’ countries, who want to pioneer implementation of the General Comment.

Baker & McKenzie, together with its corporate clients, will provide unparalleled pro bono legal expertise to develop the world’s first ever Global Advocacy Atlas on Street Children, which will collect and share information on laws, policies and ultimately numbers of children in street situations.

Baker & McKenzie’s relationship with CSC began at the American Bar Association’s summit on the Legal Needs of Street Youth in 2015. Angela Vigil explained:

“We learned that the UN and CSC wanted to make sure that street children’s voices and experiences informed the General Comment. We decided to mobilise with our corporate friends – Cargill, Merck, Regeneron and Salesforce – and together we did something that no one else has ever done on any meaningful scale. We asked hundreds of street-connected children in four capitals of the world what they wanted. These are the world’s most marginalised children – and we listened to them. That’s a first.

“I attended the South Asia consultation in New Delhi and I remember what one street youth said:

“People say we have rights of care and protection. We don’t know where they are. We have to search for them.”

“So together we got the best possible information – direct from the mouths of children who are the most qualified to tell us about life and work in the streets – to help make the ‘best possible’ General Comment – so these children no longer have to search for their rights.”

This unique corporate partnership was recognised by American Lawyer at its Annual Global Legal Awards as Pro Bono Research Project of the Year.